With plenty of time on his hands during this enforced period without horse racing, our racing analyst Adam Brookes looks at five Tweenhills homebreds it should pay to follow when the sport resumes.

Anyone that has been following Tweenhills’ social media will have seen that the first Roaring Lion foal we welcomed in Hartpury this year was a gorgeous filly out of Common Knowledge. Common Knowledge herself is now 20 years old but she’s still producing quality stock on the track. Her most recent runner, Know It All, was Stakes-placed as a two-year-old for Qatar Racing and Johnny Murtagh last year and we will be disappointed if she can’t win such a race.

Know It All actually hit 1/33 in running when a close third in the seven-furlong Gr.3 Weld Park Stakes on her final start of four, and as a half-sister to dual Gr.3-winning five-furlong performer Astrophysical Jet, she could be even better dropped to six furlongs. She’s exciting.

Lady Dragon was a popular mare within the Qatar Racing and Mikel Delzangles operations as after making her debut in the May of her three-year-old year, she won twice that season and was a Listed winner almost within 12 months. Well, her first foal Afraid of Nothing – by Tweenhills sire Charm Spirit – has already beaten her mother in one way, running five times at two and winning twice.

Trained by Ralph Beckett, Afraid of Nothing won a novice and nursery, both times making all at Epsom. She was then sent off favourite for a Listed race at Chantilly and while things didn’t work out there, we are hopeful she can regain the progressive thread in 2020, bearing in mind her dam’s achievements.

End Zone showed lots of natural ability on debut – arguably unlucky not to win at Haydock in a tight finish – and whilst slightly disappointing when only third at Kempton on his only subsequent start, we feel the gelding operation could be the making of him. Also, the pair that beat him on the polytrack – All You Wish and John Baptiste – have not run since and could well frank the form when they do as two lightly-raced sorts from top yards. End Zone is a powerful sort, likely to benefit with further racing, and as David Simcock himself says: “He should be a horse we have a lot of fun with this summer.”

Those that have watched Iron Heart’s races will know full well he’s been a slow learner – unlike his dam who was a Royal Ascot-winning two-year-old – but as a consequence there could be plenty more to come from him once he realises what the game is all about!

As the first foal out of Qatar Racing’s dual Gr.3 winner Kiyoshi, Iron Heart holds a particular place in the heart of those who work at Tweenhills and I was delighted to see him deservedly get off the mark in February. Though by a sprinter out of a mare whose best trip was probably seven furlongs, Iron Heart already looks like a mile is a bare minimum for him. I think the handicapper has taken a chance by leaving him on a mark of 76 and will be backing him to prove the point when he returns, provided the race looks likely to suit his style of running.

This filly has a fantastic pedigree as a half-sister to three Stakes performers in Military Law, Marina Piccola and Wednaan, as well as New King who won twice for Qatar Racing before being sold to Australia for 450,000gns. Military Law most recently finished runner-up in the Gr.1 Al Maktoum Challenge R3 in Dubai.

Queen of The Waves is trained by David Simcock who is very happy with her, saying in his most recent update how she looked good physically and was training well. The original plan had been to get her on track at the end of April but that won’t happen now; she should still be one to look out for. 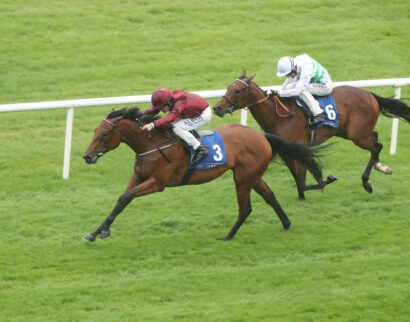 Homebred Know It All
back to studlife