A horse bought by David Redvers with the specific target of running in the Gr.1 Triumph Hurdle at the Cheltenham Festival finished a good fourth in the latest renewal last Friday.

Navajo Pass, a son of Nathaniel and Authorized mare Navajo Charm, was knocked down to Tim Leslie for 68,000gns after he'd been recommended by David Redvers.

He was bought at the Tattersalls Book 3 Yearling Sale in 2017 and spent time afterwards at Tweenhills. Naturally, we were all cheering him on in the Triumph, where he continued his upward curve after winning the Gr.2 Summit Juvenile Hurdle at Doncaster before Christmas.

Another horse bought in the same crop - for 45,000gns - was Goobinator, who has won two of his four starts over hurdles and also scored on the Flat (as did Navajo Pass).

We wish Tim Leslie and trainer Donald McCain further success with both horses. We look forward to watching them over jumps - and maybe back on the level - for many years to come. 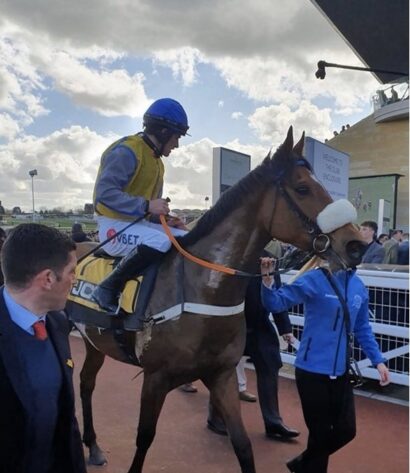 Navajo Pass and Brian Hughes
back to studlife