From Lion to Tigers...

Golf balls are like eggs. They are white, sold by the dozen, and a week later you have to buy more.

The latest craze to hit Tweenhills is Golf. Not Crazy Golf, but not far off.

It’s developing into a regular Tuesday evening fixture for plenty of the staff. It’s the only day Werner can play as he spends most of his week waiting for cows to calf. Schooled on the plains of South Africa, Werner is a big-hitter and a danger to all when he gets it right.

Sadly this week wasn’t one of those occasions and the Rodway Hill honours went to Adam who somehow managed to find most of the fairways – having played on and off since he was a kid he’s due to be hit hard by the handicapper.

Muscled up from leading the likes of Zoustar and Charm Spirit to the breeding shed, Tom goes every bit of 200 yards when he connects with his 4-iron. He just needs to work on getting more birdies.

Ivo is long of limb – have you ever seen those pictures of Peter Crouch playing golf? At the minute he’s a bit like a Sir Mark Prescott 2-year-old, laying down the foundations before he takes a big step forward for going 18 holes. Back him now for the Tweenhills Golf Day 2020*.

Graham is the yardstick, steady away – he might have ridden Wayward Lad but he’s straight as an arrow with club in hand. Having won the Gold Cup and Champion Hurdle as a jockey it should be no surprise he can plot his way around a course.

Also part of the squad is Oakgrove Stud manager David Hilton who spent 5 years at Tweenhills and cannot resist the pull of competitive sport. He says his latest round “started very poorly but ended with a flourish” – he obviously needs a course with a stiffer finish.

Phil joined for the first time on Tuesday and had clearly played before – having a pair of golf shoes was the giveaway. Oh, and he used to be a greenskeeper. He’ll come on a bundle for the run.

Reece also plays but was washing his hair this week. 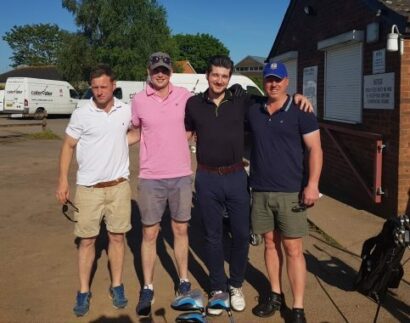 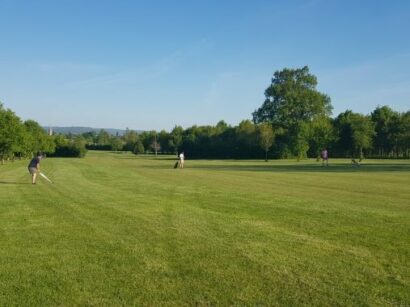 Rodway Hill Golf Course near Tweenhills
back to studlife