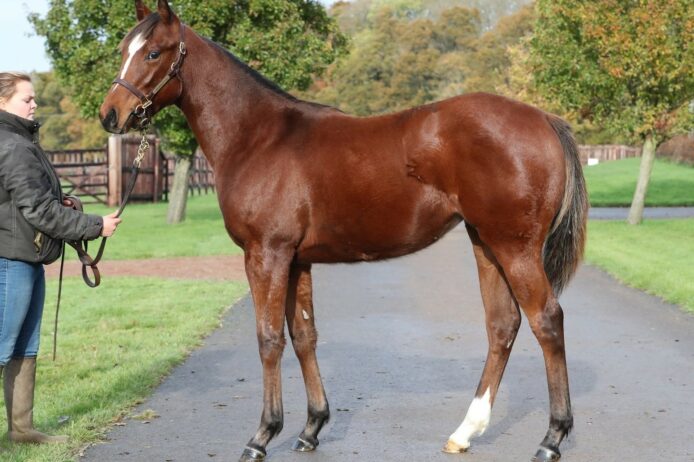 Harmony Rose as a weanling at Tweenhills

Two fillies born and raised at Tweenhills have looked smart in winning two-year-old races in the last week, namely Nymphadora in the Listed Marygate Stakes and Harmony Rose in a maiden at Cork.

The mare Bewitchment was bought by Tweenhills at the Tattersalls December Mare Sale in 2018 carrying a foal by No No Never.

That foal was a filly (main picture) who was sold by Tweenhills at the Tattersalls December Foal Sale in 2019. She then changed hands again as a yearling before going into training with Andrew Balding.

She was named Nymphadora by owner Andrew Stone's St Albans Bloodstock and improved significantly for her debut when winning the 13-runner Listed Marygate Stakes at York last Friday. She tanked through the race before fidning for pressure and looks a genuine contender for the Gr.2 Queen Mary Stakes at Royal Ascot.

Qatar Racing raced Evil Spell after her purchase from Italy, where she was a Listed sprint winner in 2016, and sent her to Hot Streak in 2018. The resulting foal was a filly (pictured right) who was sold at the Tattersalls December Foal Sale.

She was then bought back for just €5,500 at the Goffs February Sale this year. Sent into training with Ken Condon and named Harmony Rose, she showed electric speed when placed on her first two starts and then won over five furlong at Cork on Wednesday. In second was a filly who has been placed in Listed company the time before. Harmony Rose could also be seen at Royal Ascot.

Harmony Rose as a weanling at Tweenhills