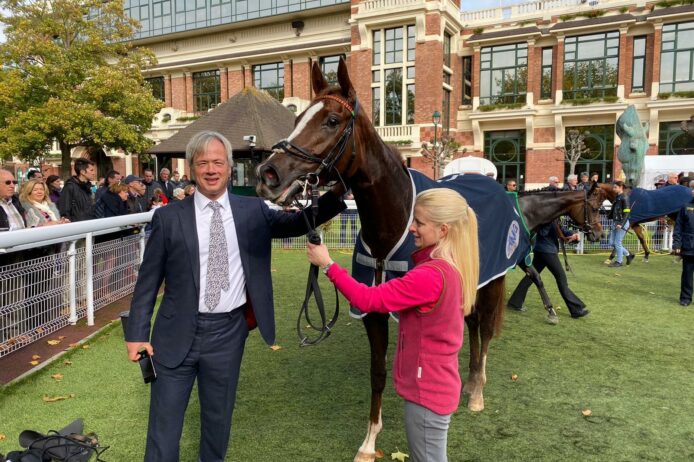 Run Wild with a happy member of the Tweenhills Fillies Syndicate

The Tweenhills Fillies Syndictate enjoyed its biggest result so far - in its first season - when Run Wild finished second in the Group 3 Prix Reservoirs over a mile at Deauville last Wednesday.

Run Wild had narrowly missed out on black type when fourth in the Group 2 May Hill Stakes behind subsequent narrow Group 1 Fillies' Mile runner-up Powerful Breeze, and she was sent off favourite form the Prix Reservoirs.

However, the very testing ground at Deauville was an unknown for Run Wild (her half-sister Rock My Love was a Champion 2yo Filly on soft ground in Germany, but her sire Amaron is by fast-ground influence Shamardal) and while she handled it, maybe she didn't relish it. That was the view of Run Wild's jockey Pierre-Charles Boudot too. She travelled best but just couldn't get past Pocket Square, who is undoubtedly a very smart filly in her own right.

The John Gosden-trained Run Wild should appreciate a mile and a quarter at some stage next year and there are plenty of options open to her, which is very exciting for the Tweenhills Fillies Syndictate. She was bought at Baden-Baden last September for €160,000 and is part-owned by Meridian International.

As a winner with black type at 2, she already looks a very good investment but we feel her best days are still ahead of her.

Run Wild with a happy member of the Tweenhills Fillies Syndicate