Racing Analyst and Bloodstock Assistant Adam Brookes names a handful of Tweenhills homebred horses who he expects to be winning in 2023.

Having been at Tweenhills for almost six years, I’ve now seen several batches of homebred youngsters reach the racecourse and it’s always enjoyable to see them come out on top.

Qatar Racing’s My Lion (b f Roaring Lion – Diamonds Pour Moi) did just that when making all in a 1m fillies’ novice at Windsor on Oct 3 for Andrew Balding. She was given a well-judged ride by David Egan but that certainly doesn’t mean she can’t improve another big chunk as a 3yo. Her dam carried Sheikh Fahad’s Pearl Bloodstock colours to Listed success over 1m4f in the November of her 3yo year (after being placed in the Cheshire Oaks and getting injured in the Oaks itself) and My Lion could scale those heights herself in time.

Qatar Racing’s Lion Tamer (ch c Roaring Lion – Exceedingly Rare) was runner-up in a 1m maiden at Kempton on debut (Oct 31) but had traded at 30/100 in-running on the Betfair exchange after quickening clear under 3f out. The well-beaten fourth won next time and Lion Tamer looks to have lots of natural ability – his dam won her only start – and will be winning races for John And Thady Gosden.

Another Tweenhills homebred colt well regarded his trainer – in this case Joseph O’Brien – is Qatar Racing’s Valiant King (b c Roaring Lion – Assembly). He was an encouraging third at Killarney on debut and, though he didn’t improve significantly at the Curragh (behind the same horse in Hiawatha), he remains capable of better. He had been working well before his introduction and we retain the faith.

David Howden also houses his mares at Tweenhills and his first crop of homebred runners produced plenty to cheer in 2022. Running Lion (gr f Roaring Lion – Bella Nouf) won 1m novices at both Lingfield and Chelmsford and was being considered for the Listed Montrose Stakes before being put away for the year. She’s Timeform-rated 95p and could have an Oaks trial on her agenda in 2023.

Zu Run (b c Zoustar – Bewitchment) improved plenty from his debut when winning a 7f novice at Chelmsford in August and was unlucky not to follow up under a penalty at Kempton, ending up with a lot to do. Zu Run can switch to handicaps off a BHA mark of 89 or try something even better – he was declared for a Listed race before the meeting was abandoned – on his return next season.

Of those hombreds that remain unraced, keep an eye out for colts Alpha Zulu (Zoustar – La Rioja) and Middle Earth (Roaring Lion – Roheryn) and fillies Queen Regent (Roaring Lion – Common Knowledge) and Queen of The Pride (Roaring Lion – Simple Verse), the first-named with James Ferguson and the rest with The Gosdens. 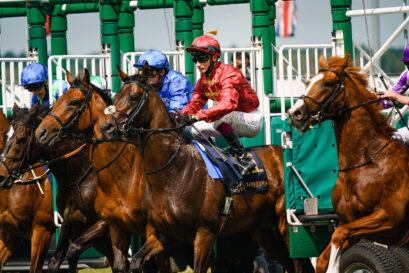