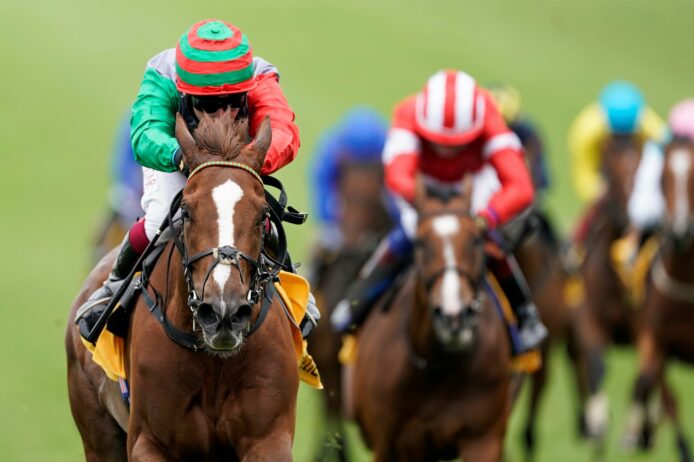 Run Wild does just that in Listed Pretty Polly

An already fantastic weekend – as Kameko had won the QIPCO 2,000 Guineas on Saturday – turned into an amazing one for us when the Tweenhills Fillies syndicate and Meridian International-owned Run Wild turned the Listed Pretty Polly Fillies’ Stakes at Newmarket on Sunday into a precession.

Run Wild had got black type as a two-year-old but given her physique – she’s a strapping filly – it was always likely that she would improve at three and so it proved as she dominated her seven rivals from start to finish in the Pretty Polly in the hands of Kameko’s jockey Oisin Murphy.

Sent off at 11/2, Run Wild gave John Gosden his sixth win in the Pretty Polly Stakes, including with subsequent Gr.1 Oaks winner Taghrooda in 2014. The Oaks at Epsom is unlikely to be on Run Wild’s radar as she clearly has a high cruising speed over a mile and a quarter and therefore there must be doubts about her proving as effective over a mile and a half.

Gosden said: “She loves to use her stride and she was drawn in the middle, so I said to Oisin ‘stay there and do your own thing’.

“She is not the sort of filly you want to take back and fiddle about with. She just loves to use her stride which she did to good effect. I would say that is it trip wise and I wouldn’t go any further than a mile and a quarter.

“She has got plenty of experience and put it to good use. We will stay at a mile and a quarter and we will not charge off to an Oaks or anything.”

The very exciting Run Wild was bought by David Redvers and Meridian International for €160,000 at the Baden-Baden September Yearling Sale from Gestu Etzean and is worth considerably more than that now. She’s from the first crop of Amaron (by the late Shamardal) out of Cadeaux Genereux mare Rondinay.

Run Wild is a half-sister to Champion two-year-old filly in Germany in 2017, Rock My Love, as well as another Stakes winner in Rock My Soul, dam of Gr.3 Chester Vase winner Young Rascal.