Getting To Know You - Adam Brookes

Hi Adam. You are the Racing Analyst for David Redvers Bloodstock and Qatar Racing but we want to know more about the man behind the multiple computer screens. Here are your 10 questions...

Where’s the most unusual place you’ve been?

The Robot Restaurant in Tokyo: totally mental. I was lucky to go to Tokyo a couple of years ago and loved the place: the people, the food, the sights. I would happily go and live there for a year or so.

And what's the most unusual thing you’ve eaten?

I’m fairly boring when it comes to this and I wouldn’t eat any anything I felt uncomfortable with – i.e. whale, which I did see on a menu in Japan. There’s a dessert over there called Mochi ice cream which is bizarre so I’ll say that: they are pastel-coloured balls that are sort of frozen but not and the texture changes in your mouth.

What are the best and worst purchases you’ve ever made?

The best is probably a black Fender Telecaster guitar which I bought when I was at uni; that was a while ago now and the guitar is going stronger than me. The worst would be all those items of clothing I thought were a good idea at the time but I’m now having to concede will never see the light of day.

Which song have you got on repeat?

At the minute it’s 'That Summer Feeling' by Jonathan Richman and The Modern Lovers.

What program do you turn off if it’s on?

Love Island – though plenty of people I consider to have a brain tell me I’m missing out. Maybe one day I’ll surrender.

How does your ideal day off look?

Lie in, run or decent game of football, back the winner of the 0-65 mile-and-a-half handicap at Wolverhampton, eat some of the winnings, play guitar, watch every episode of The Office (UK version, obviously)...again, back to bed. Next.

If magic was real, what would you do first?

Mute a few people. DM me for names.

What makes you roll your eyes every time you hear it?

What would a world populated by clones of you be like?

A small plot of land contained by a wall of sound, with a few of me in it (if you really insist on there being more than one of us), and the rest of the world for the animals.

While I’d like the form to have worked out a bit better, Enemy looked a colt of serious potential to my eye when making a winning debut at Ascot in September. All of his siblings to have raced so far have been middle-distance horses – including Magic Wand who won a Gr.1 in Australia last month – but he’s by Muhaarar and looks a miler. 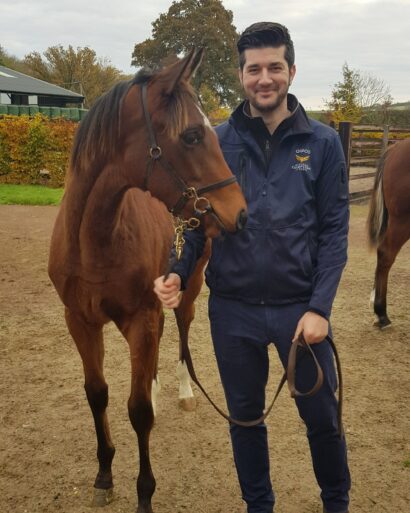