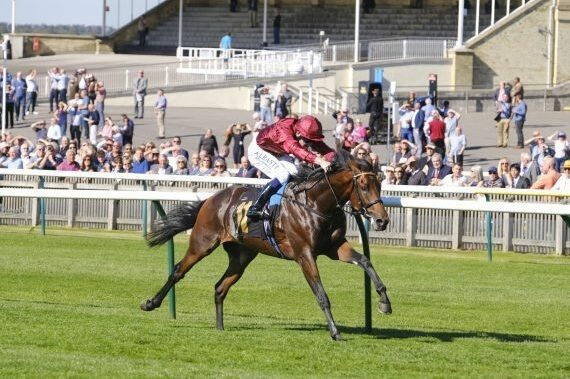 Another Stakes winner for Charm Spirit

Bred by Shutford Stud – out of Marju mare Marika – and purchased by David Redvers for 135,000gns at the Tattersalls Book 1 Yearling Sale on behalf of Qatar Racing, Kick On has now won two of his four starts and looks a horse of serious potential.

Both successes have come from the front on the Rowley Mile course, with the Feilden coming at the expense of another promising and unexposed colt in Walkinthesand, with the pair four and a half lengths clear of the third.

Kick On travelled like the best horse in the race and found plenty for pressure when asked by Oisin Murphy, always doing enough to hold the runner-up. It was a third win in the race in five years for trainer John Gosden whose 2015 Feilden winner Golden Horn went onto win four Group 1s including the Derby.

It remains to be seen whether Kick On has the Derby at Epsom on his agenda – he’s not bred to relish a mile and a half – but he still has classic claims, with the Poule d’Essai des Poulains and Prix du Jockey Club both realistic targets.

Charm Spirit had another impressive winner the day before – also ridden by Oisin – when two-year-old Lambeth Walk won comfortably on debut at Windsor. Trained by Archie Watson, the odds-on favourite was soon to the fore and found plenty to draw away from second favourite Dr Simpson.

Lambeth Walk was bred by The Kathryn Stud out of Cockney Rebel mare Cockney Dancer, Lambeth Walk was well-bought by Performance Genetics for 22,000gns at Tattersalls’ Book 3 Yearling Sale. She looks to have Royal Ascot potential, so hopefully this is just the start of a very exciting season for those with an interest in Charm Spirit’s progeny.