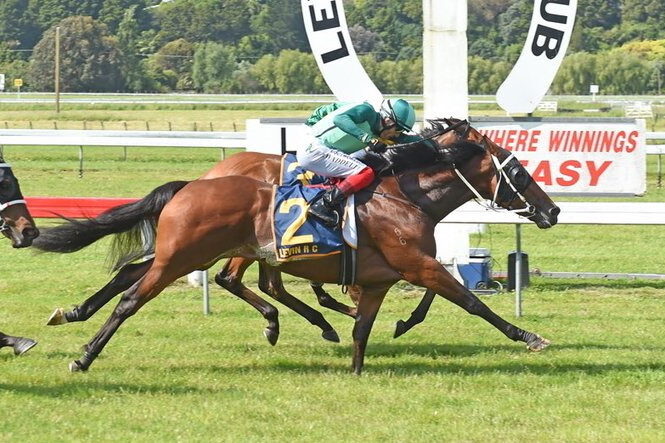 Charm Spirit’s three-year-old son Scorpz has delighted trainer Stephen Marsh with how he has recovered from his third in the Gr.1 New Zealand Derby and he’s due to embark on a Sydney campaign.

Dual Stakes winner – including the Gr.3 Wellington Stakes – Scorpz maintained a strong gallop to the line when beaten by Sherwood Forest and Two Illicit in the NZ Derby, leaving his trainer in no doubt that he has plenty of stamina.

Scorpz will contest the Gr.1 Rosehill Guineas (2000m) on March 21 before the Gr.1 Australian Derby (2400m) at Randwick a fortnight later.

Marsh said: “I was rapt with his Derby run and he came through it well. He has had six days out in the paddock and he put on some good weight and came back looking awesome for his little break.

"I was thinking originally that I would just go straight to the Australian Derby but he did so well in his week in the paddock that we will go to the Rosehill Guineas now for sure and then into the Derby. He has just come back magic."

Marsh admits that Scorpz will be seen at his best when he is back over 2400m.

"The Rosehill Guineas is not a race I am worried about. All I want to do is give him a fitting run for the Derby and that is when he will be peaking again. That is the race for him."

Successful in three of his 11 starts, Scorpz’s best form is on quick ground, given the firm underfoot conditions that have prevailed in New Zealand over the past four months, but his trainer believes he would handle a rain-affected surface should it be so in Sydney.

"I think he probably would handle a softer surface. If it was a heavy track in the Derby and we went five weeks between runs you might come up a little bit short, so we don’t want to chance anything and that is another reason for the Rosehill Guineas run.

Marsh knows what it takes to win a three-year-old classic in Australia as he trained 2016 Gr.1 Australian Oaks (2400m) heroine Sofia Rosa.

Charm Spirit colt Aerclub looked Stakes quality as he maintained his unbeaten record in a mile winners' race at Dundalk on Friday, where they raced behind closed doors. Aerclub had made a winning debut over the same course and distance in November a ...

Charm Spirit filly Royal Dynasty won her third race from four starts for new connections on Friday. After two all-the-way handicap wins over six furlongs at Lingfield in December and February, Royal Dynasty proved herself over seven furlongs when mak ...