#3 - The more the merrier for racing

Numerous recent trips to Australia have brought into sharp focus the differences between our great racing nations. One feels very much in the ascendancy, the other like its teetering on the edge of oblivion.

An accurate real time comparison is frightening. The whole look and feel of the sport and its respective industries are diverging at such a rate that unless some strategic plan is put into place imminently, far from leading our sport worldwide, British racing will shortly become an also ran.

I keep asking myself how did we get it so wrong? How can a country like Australia with 40% of our population be running away with the prize whilst we have a £17m deficit in our funding and our industry relies almost entirely on the patronage of rich foreigners? A look at the world’s top races already shows that Australia are making huge strides and these strides are increasing in length by the year.

Perhaps the best used statistic to demonstrate the difference in cultures is percentage of population that participates in ownership. Scarcely believable I know, but Aushorse claim that 1 in 300 Australians own a share in a racehorse compared to 1 in 12,000+ here. However, horse racing is still the second most attended spectator sport in the UK after football, with steady attendances and growing TV figures, so why is the anomaly in ownership figures so stark?

Compare the crowds and fan base in Japan to here. Kyoto and Nakayama attendances dwarf our own, yet it is the feverish excitement in the audience that is most striking. Why is this? Is horse racing so deeply ingrained in their national psyche that it is the must see, must participate sport?

Certainly prize money and the funding structures play a large part in the health of the sport in those two great nations but the other key common ingredient is the high level of participation through shared ownership and syndicates.

The problem here is that the industry has taken for granted the investment and participation of a select few elite owners. Between them they prop up bloodstock sales and supply a high percentage of the runners that the BHA, Weatherbys, racecourses and the betting industry require to run their businesses. The alarming fact is that at any moment our industry could be put in catastrophic peril through the loss of just one of these major players. Falling prize money, ill health or simply a change of heart could precipitate this at any time.

Meanwhile, British racing makes pitiful efforts to attract the partnerships and syndicates on which Australian and Japanese racing flourish and thrive. In fact the organisations who are responsible for British racing’s future prosperity even on occasions appear to go out of their way to make things difficult.

Racecourses and Weatherbys failure to print the names of more than four shareholders in racecards is a small example of how far we have to go. Allocation of race-day passes appears totally at the initiative of individual racecourses. Standard contracts and other fail-safe procedures to safeguard shareholders and a half-hearted and under-funded attempt to market racehorse ownership though syndicates, demonstrate a failure to grasp the very real threat to our market and our sport.

Appalling prize-money remains the greatest threat to our sport’s ability to thrive and grow and an honest appraisal of where we have gone wrong through a published study into the funding mechanism of Australian racing would be a good starting point. However, it will always be difficult arguing the case for legislation with Government for a sport which numbers a few hugely wealthy participants. Participation through ownership needs to be for the many and the sooner we realise this the sooner we will realise the benefits enjoyed by our competitors.

All Sunlight's owners are listed on the racecard in Australia... 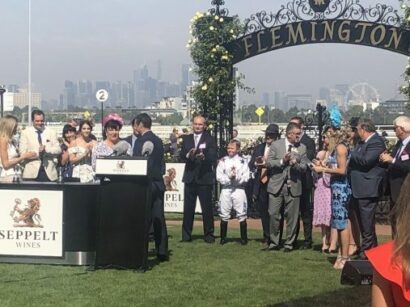 ...and they all celebrate when she wins! 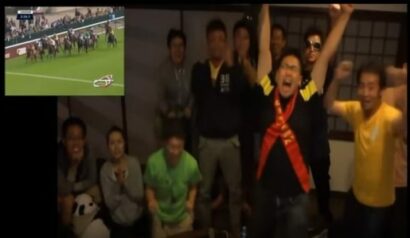 Japanese racing fans are also engaged!
back to studlife